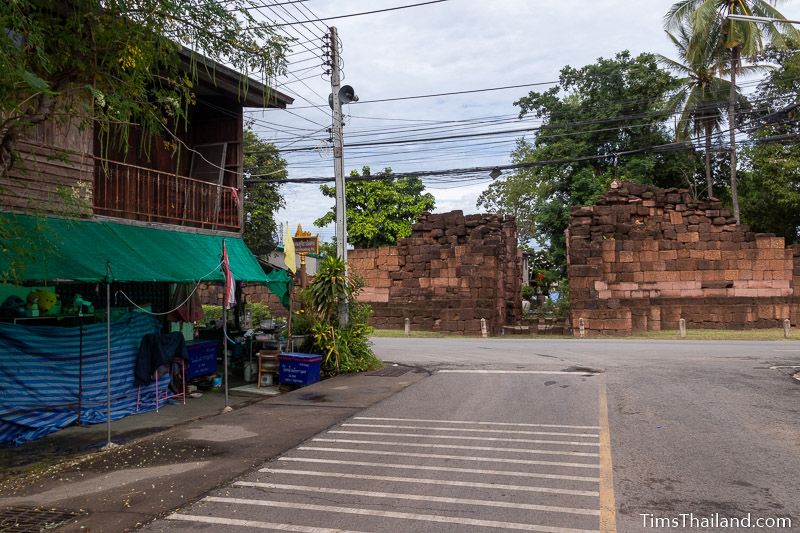 Many people visiting the amazing Prasat Phimai temple are unaware that in its day it stood at the heart of a large important city. Lying on the Mun River and along overland trade routes to the north and south, as well as having abundant salt deposits (there are none near Angkor), Phimai city prospered on trade during its time in the Khmer empire. And many remnants of the town infrastructure… Read More 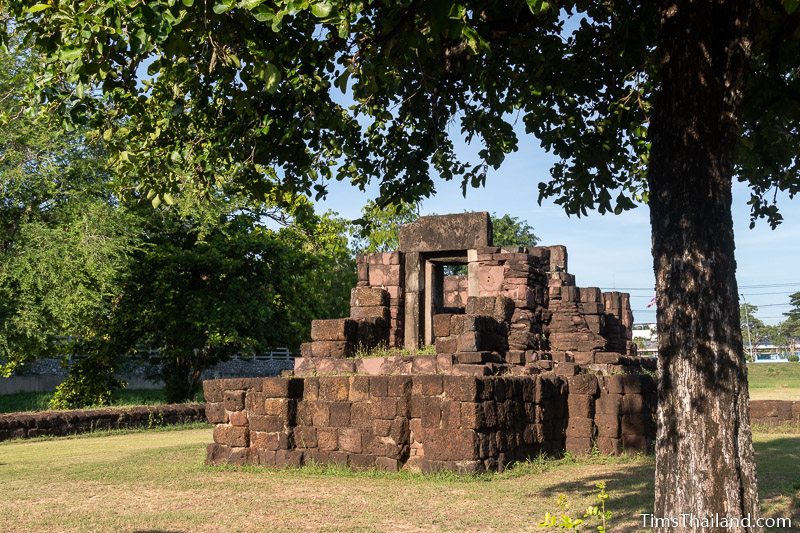 Kuti Ruesi Noi (กุฏิฤาษีน้อย), just 450m south of the southern city gate, was the temple for one of the 102 arogayasala (hospitals) that King Jayavarman VII (r. 1182-1219) had built around the empire. It follows the standard arogayasala design in most regards. It faces roughly to the east, in line with Phimai temple and town. It’s quite incomplete – none of the walls are tall and some are gone entirely… Read More

Noen Wat Khok (เนินวัดโคก) was a small temple in its day, but it was likely quite an important one. Like West Mebon in the Angkor region, Noen Wat Khok sat prominently on an island in the middle of a massive baray. Now almost entirely silted in and used mostly for agriculture (though it’s still clearly recognizable when seen from above), the old Phimai Baray stretches 750m by 1800m, the biggest… Read More 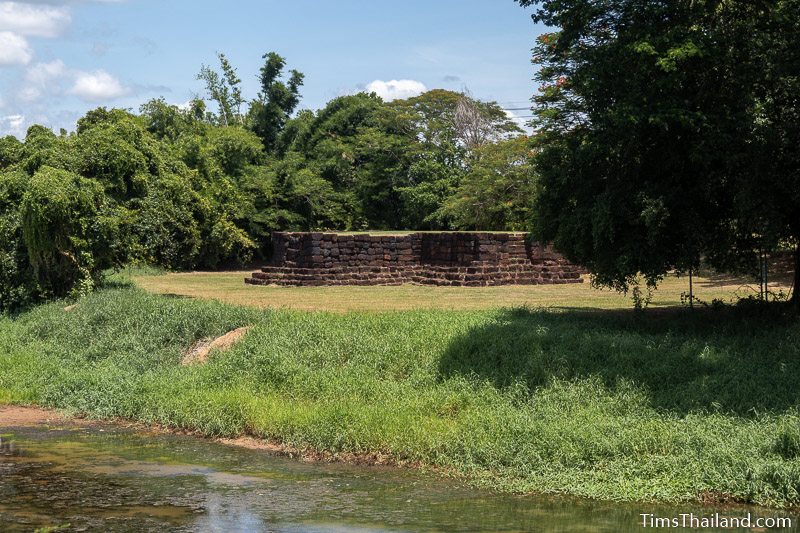 Just over a kilometer south of Phimai city’s southern gate and directly centered along the axis of the temple and town, Tha Nang Sra Phom (ท่านางสระผม) is the only preserved Khmer-era boat landing known in Thailand. Likely built by King Jayavarman VII (r. 1182-1219), it’s a simple cruciform platform made entirely of laterite with very steep stairs on three of the sides. When it was excavated the archaeologists found post… Read More 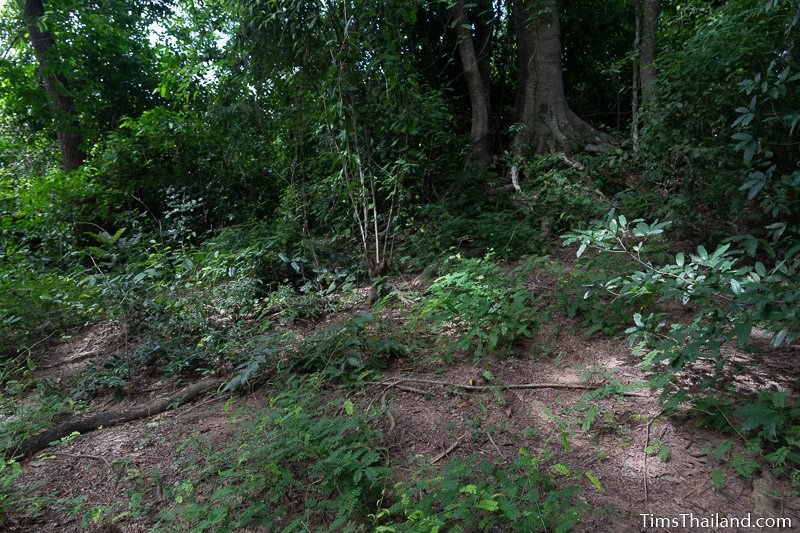 Less than 100m from the south shore of the old Phimai Baray, San Pu-Ta Ban Wang Hin (ศาลปู่ตา บ้านวังหิน) is lined up with the Prasat Phimai’s soaring prang, 3.6km away, instead of being lined up with the baray, suggesting it may have once been an important temple. It’s age and purpose are unknown and nothing ancient – no pottery shards, bricks, or building blocks – is visible now. The few… Read More 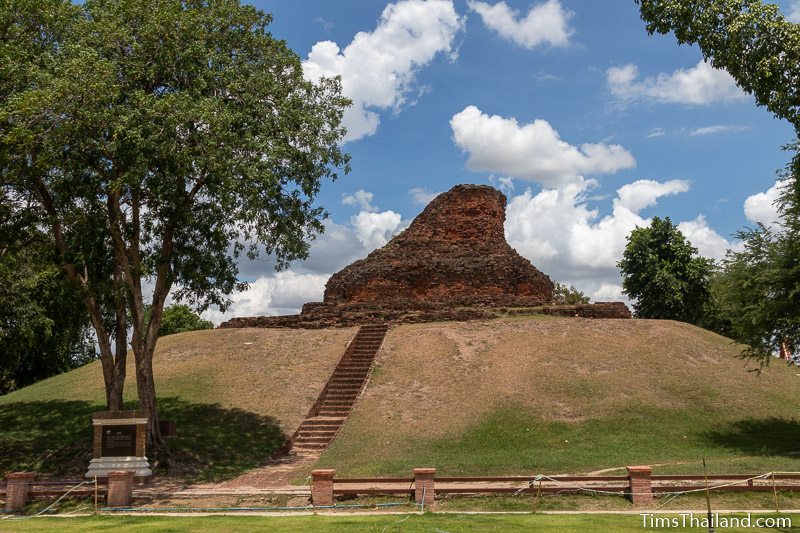 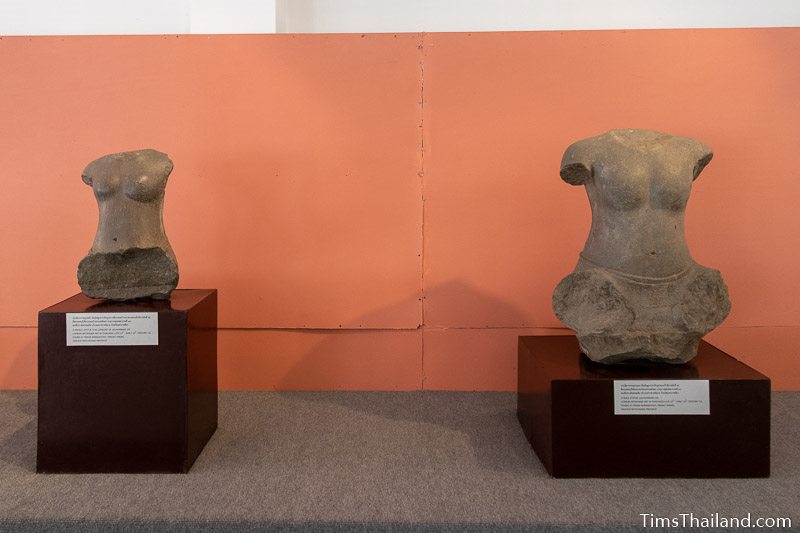 The classic love story between Nang Oraphim (นางอรพิม) and Thao Pajit (ท้าวปาจิต) is a widely known Thai folktale (some even consider it a non-canonical Jataka tale) with many different versions. The story as told in Khorat province is based on the town of Phimai where locals have declared the ruined Meru Brahmathat stupa as the cremation site of the villainous King Brahmathat. Some locals take the story one step further… Read More 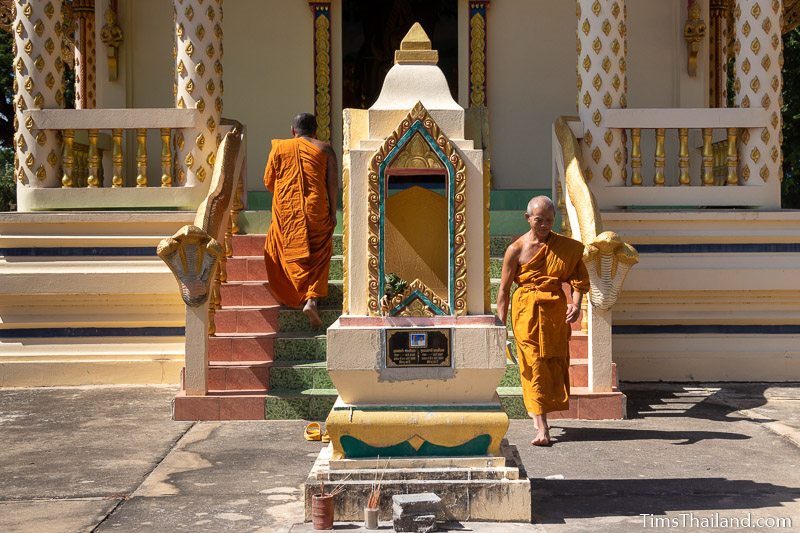 These photos are from the Boon Khao Kam (บุญเข้ากรรม) ceremony at Ban Khok Nong Waeng, Amphoe Non Daeng, Nakhon Ratchasima Province between November 29 and December 10, 2019. Thanks to everyone there, especially Phra Khru O-Pat, Phra Bunserm, Phra Apichat, Mae Wanni, and Mae Un, for being so helpful and welcoming me at the temple for ten days. For more information, there’s an explanation of Boon Khao Kam and an… Read More 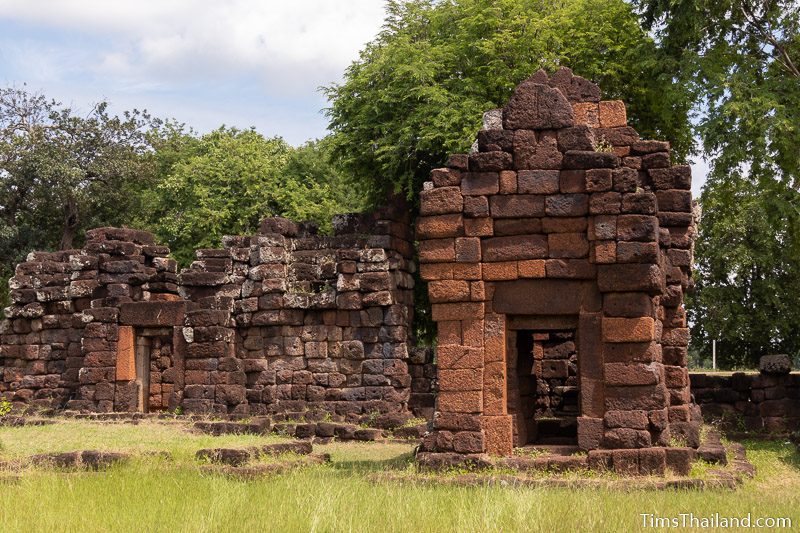 A temple for one of the 102 arogayasala (hospitals) built by King Jayavarman VII (r. 1182-1219), Prang Phon Songkhram (ปรางค์พลสงคราม) follows the standard design of arogayasala, including being built primarily with laterite, using sandstone only for trim. The only original entrance is through an eastern gopura. It’s cross-shaped with small chambers to the east, south, and north (which still have their roofs) and an uncarved lintel over the outer front… Read More 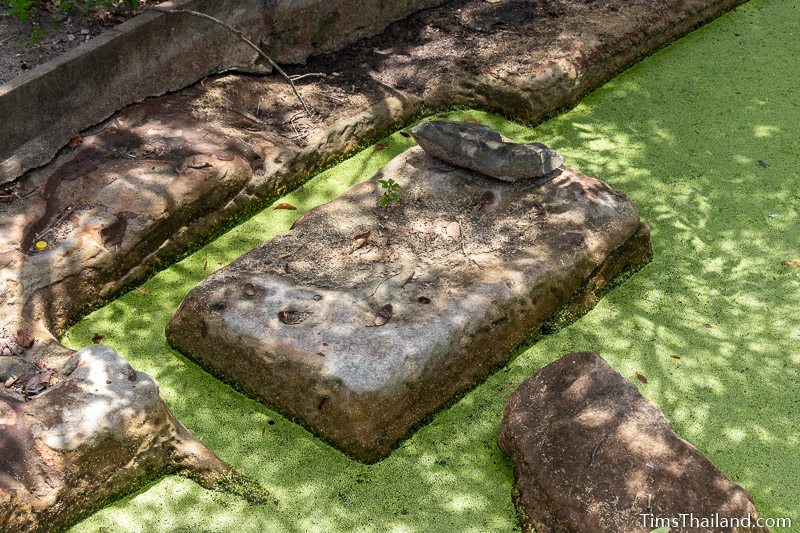 Virtually unknown, Khao Hin Tat Ancient Quarry (แหล่งตัดหินเขาหินตัด) lies a kilometer away as the crow flies (by road it’s either two or three kilometers, depending which direction you’re driving due to needing to U-turn on the Mittraphap highway) from the well-known Si Khio Ancient Quarry, and naturally they share similar characteristics and histories. The grey sandstone is of the Phu Phan Formation, which is around 120 million years old. The stone… Read More 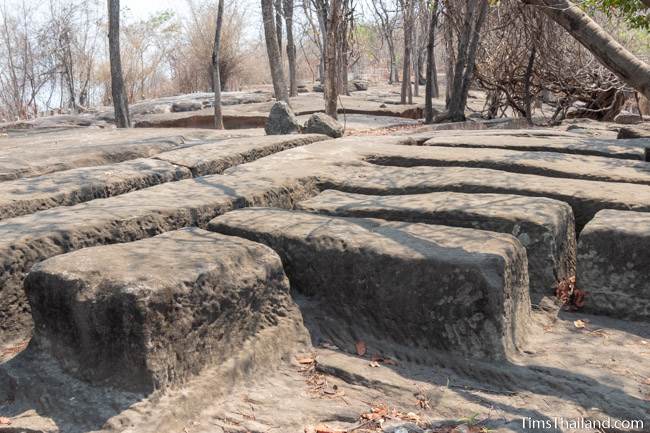 Si Khio Ancient Quarry (แหล่งโบราณหินตัดสีคิ้ว) is in the Phu Phan Formation, which was laid down about 120 million years ago. The sandstone here is grey and rather course but lacks conglomerate, making it good for carving. For unknown reasons, work here stopped abruptly so various stages of the cutting can be seen, from the beginning of carving the grooves to make the blocks to a field where all the stone… Read More 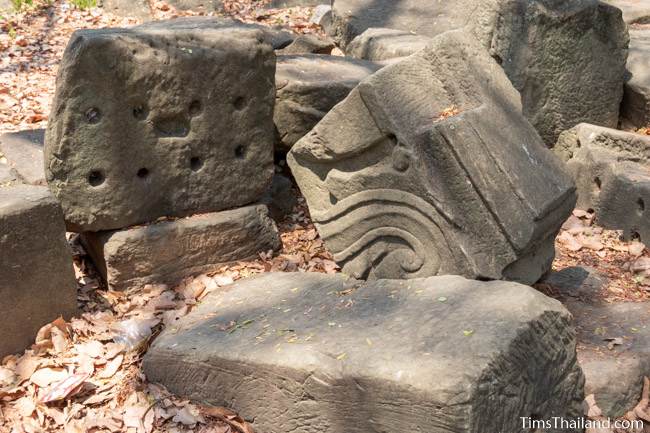 Although Prasat Ban Bu Yai (ปราสาทหินบ้านบุใหญ่) lies in total ruin and most significant carvings are gone, when you see the size of the lotus-bud top (several pieces of it are visible in the rubble) you can tell that this was once a large temple. It had a single sandstone tower that can only be said to have been built in the 11th to 13th centuries. There is a second, smaller… Read More 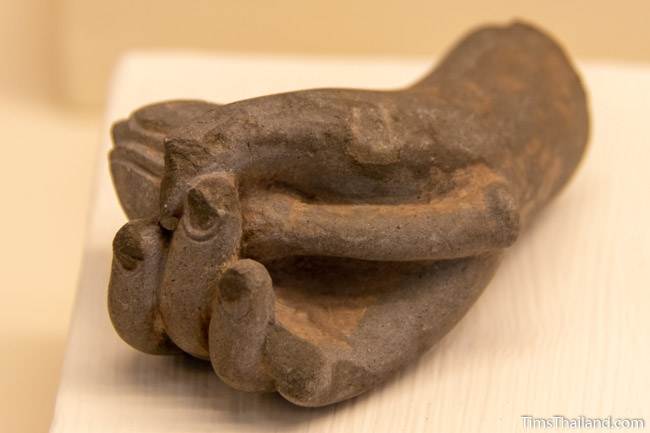 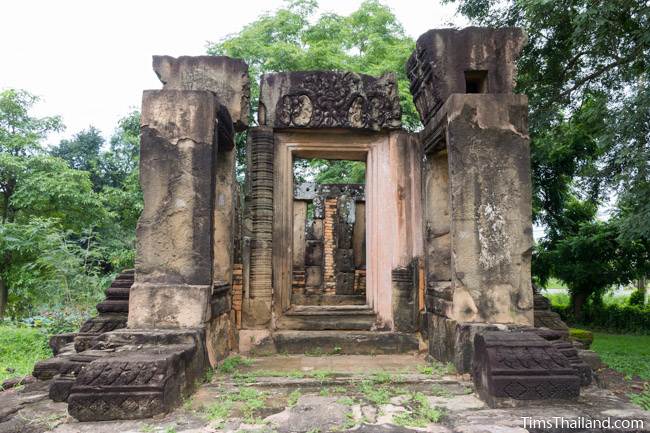 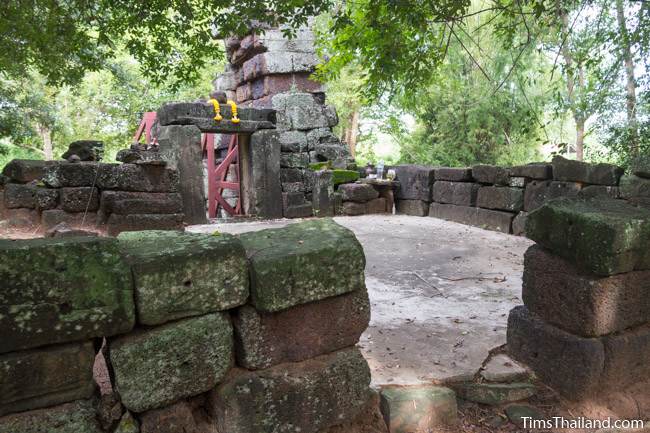 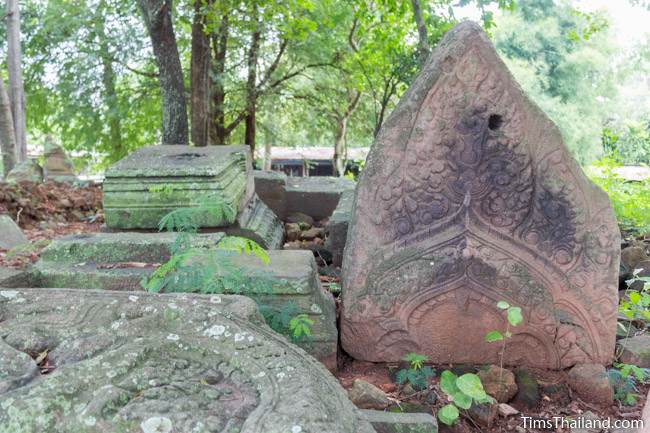 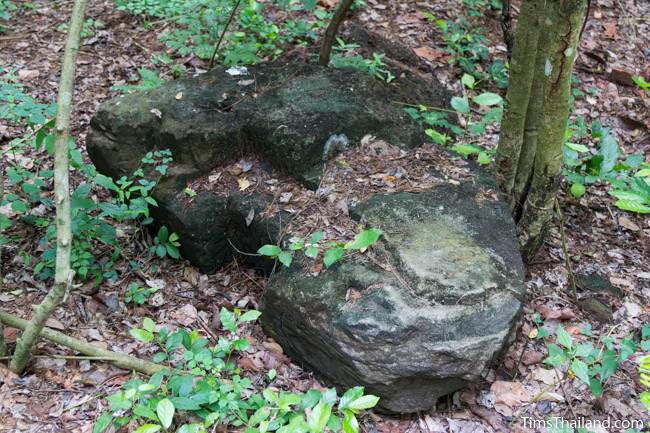 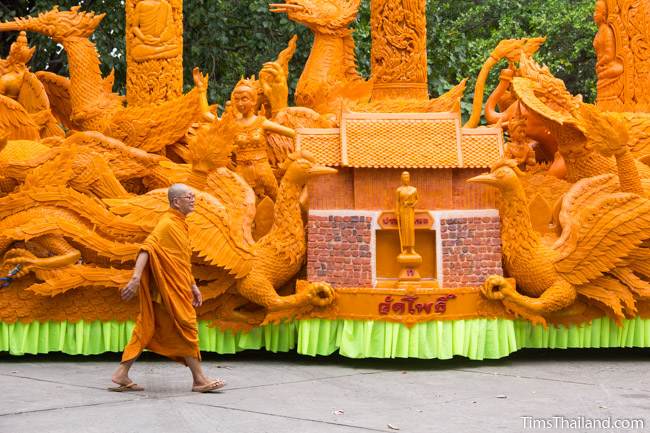 These photos are from the Boon Khao Phansa (บุญเข้าพรรษา) celebration in Khorat city on July 27 and 28, 2018. Most of the parade float-making photos were taken on July 19. Thanks to Ajahn Mai at Wat Nong Bua Rong for answering so many questions. For more information, there’s an explanation of Boon Khao Phansa and an overview of heet sip-song, the twelve Isan merit-making traditions. Boon Khao Phansa, the first day of the Buddhist… Read More