In the Buddha's time, most monks did not stay in monasteries for long periods, they traveled town to town spreading his teaching. During the rainy season in India, travel was very difficult, so monks (of all religions, not just Buddhists) tended to stay in one place during this time. This was also appreciated by farmers

because wandering monks sometimes trampled their newly planted crops. When the Buddha learned that some of his monks were ignoring this tradition, he formalized the Rains Retreat (phansa in Thai) and prohibited his monks from travel during this time. Monks are not forbidden from leaving the temple grounds as is sometimes misreported: morning alms rounds, blessing ceremonies, formal education, etc. go on the same as they do the rest of the year.

Many long-term monks use these three-months for intense dharma study or meditation practice, and this used to be the season when most Thai men did a short ordination to fulfill their social obligation. (These days, however, many men ordain for only a few days and this is done at other times of the year because anyone becoming a monk during phansa is expected to stay the entire three months.) Lay people are encouraged to elevate their religious practice, such as going to the temple to listen to sermons, reading about dharma, and fully observing the five precepts (No killing any living creatures, no stealing, no sexual misconduct, no lying or gossiping, and no intoxicants –the very devout do eight precepts, which add no eating after noon; no entertainment or personal adornments, no sleeping on a high or luxurious bed, and no sexual activity at all). The heightened attention to the precepts is why the Rains Retreat is often called "Buddhist Lent" in English. 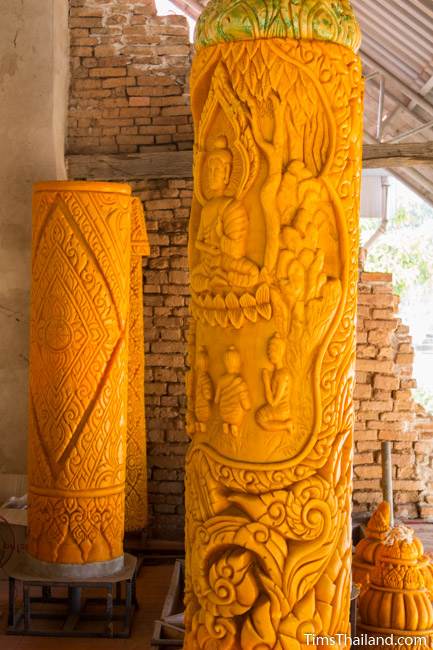 Khao Phansa ("Beginning the Rains Retreat") is the official first day of the Rains Retreat. On this day people bring candles to donate to the monks. Before there was electricity, monks spending more time reading or meditating in their quarters than usual needed many candles. These days, the donated candles are only used for burning in front of shrines and statues or when there is a power cut. People also give monks thin "rain robes" (pa ap nam-fon), which were once used to avoid nudity when showering outdoors in a river, in the rain, or with a bucket at a water tank. Like the candles, they're generally not used anymore because most temples have modern bathroom blocks.

This is a Buddhist holiday observed nationwide and there are no uniquely Isan activities for Boon Khao Phansa. However, the modern tradition of candle parades began here and Isan still has the largest and best-known. During the reign of King Rama V, the appointed governor of Ubon Ratchathani decided that the rocket festival (Boon Bang Fai) was too dangerous and outlawed it. He replaced the rocket competition with a candle competition and the carved candles were so large that they had to be hauled to the temples by cart. Over time this morphed into the giant parade floats of today.