The impressive temple ruin of Wat Phra Si Rattana Mahathat Chaliang (วัดพระศรีรัตนมหาธาตุเชลียง) lies in the heart of the ancient city of Chaliang and is the largest and most impressive site in Si Satchanalai Historical Park. People often call it the northernmost Khmer ruin, though this title actually belongs to Ku Phanna in Sakon Nakhon province, which is 0.9 minute longitude further north. 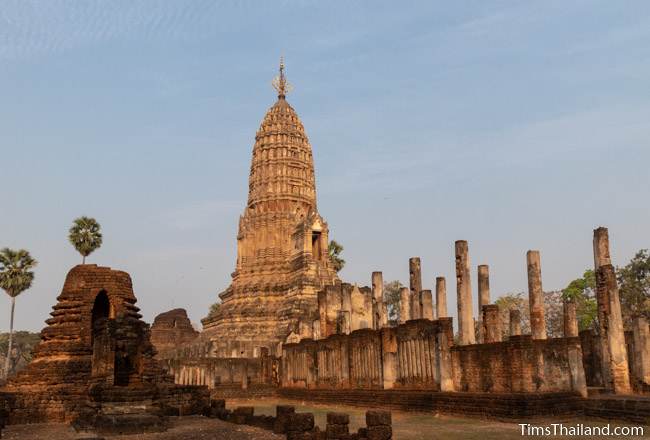 This narrow, naturally fortified spot inside a huge bend of the Yom River has been continuously inhabited back to at least the third or fourth century (Wat Chom Chuen between here and Wat Chao Chan, Chaliang's other Khmer site, has a preserved burial excavation pit from this time) and it was a Dvaravati town until the Khmer arrived in the late 11th or early12th century. Sukhothai broke free from the Khmer in 1237 and made this their second city (ruled over by the crown prince) with the new name of Si Satchanalai. They expanded west, building almost all of the ancient temples that can be seen today and making what had been a relatively small Khmer outpost into a major religious, artistic, and trade center. Wat Phra Si Rattana Mahathat Chaliang is the "Sri Ratanadjatu" of the famous Ramkhamhaeng Inscription dated to 1292. The Ayutthaya kingdom annexed this region in the 15th century and changed the city's name to Sawankhalok. Though Wat Phra Si Rattana Mahathat Chaliang was no longer in the city's central core, both Sukhothai and Ayutthaya maintained it as one of their most important temples. But eight years after the Ayutthaya kingdom fell in 1767, King Rama 1 (r. 1782-1809) moved Sawankhalok city 15km south to its present location and left Wat Phra Si Rattana Mahathat Chaliang and the rest of this city in ruin.

Everything at Wat Phra Si Rattana Mahathat Chaliang is built of laterite and is or was covered by stucco. If the Khmer used any sandstone it's been removed or is hidden beneath later renovations. 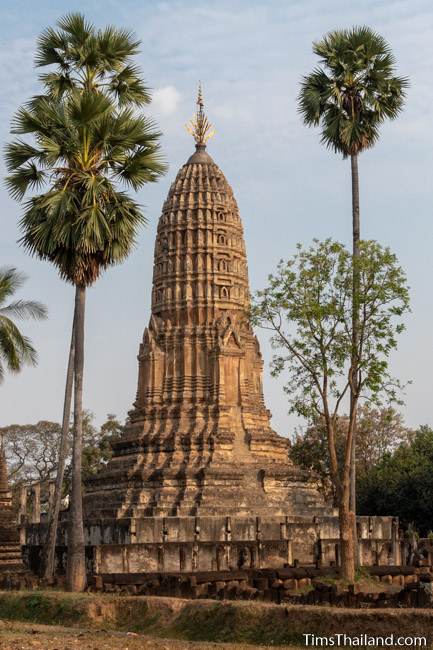 Wat Phra Si Rattana Mahathat Chaliang's centerpiece and probably only original Khmer portion is a soaring (I couldn't find any measurement of the height, but it seems to be around 25m) corn-cob prang. Due to additions and renovations it's not possible to identify its age with much certainty. Most sources attribute it to early 13th century, possibly King Jayavarman VII (r. 1182-1219), though like Wat Chao Chan it could have come a little later. Though it might not even be Khmer at all: some archeologists theorized that the Sukhothai built it from scratch. Regardless of who erected the original, it present form is from the Ayutthaya era when King Borom Trai Lokkanat (r. 1448-1488) built over the old one. 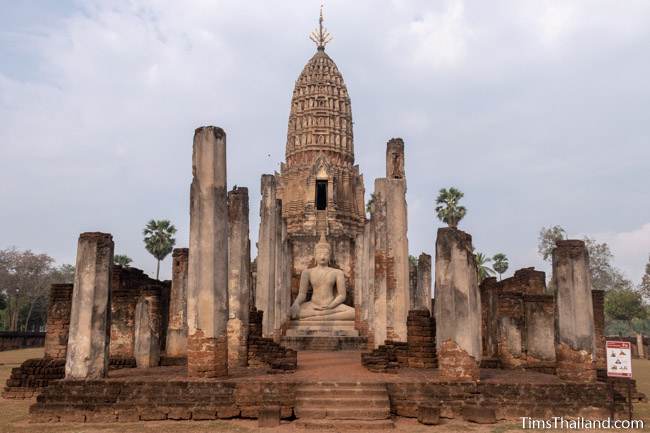 The prang's first row of antefixes are deities but those on the seven rows above it are smooth and were once covered by tiles. Two pieces of these ceramic tiles are on display at the Si Satchanalai Information Center museum and another twelve are in the Sawanvoranayok National Museum, 15km to the south. The picture on the south pediment has cracked off, but the other three remain mostly intact. The fierce figure to the east is a yak guardian while the other two have Buddhas. 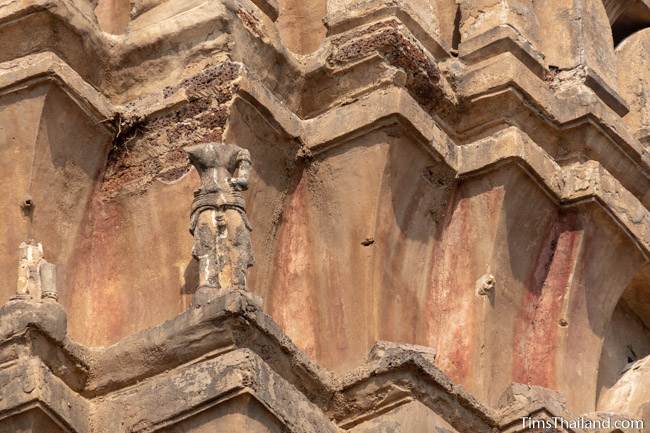 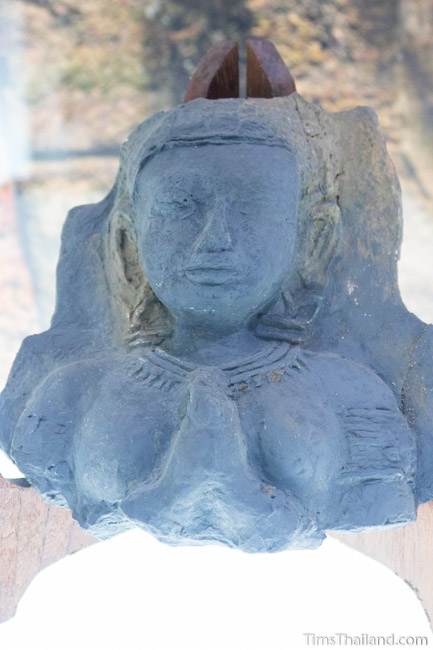 Steep stairs on the east side lead up into the inner chamber where a lotus-bud stupa is believed to hold Buddha relics; Mahathat means "holy relic." This is an important site for locals who make regular offerings, though usually they do so down below instead of climbing up inside. The large wooden door here is old, but not ancient. 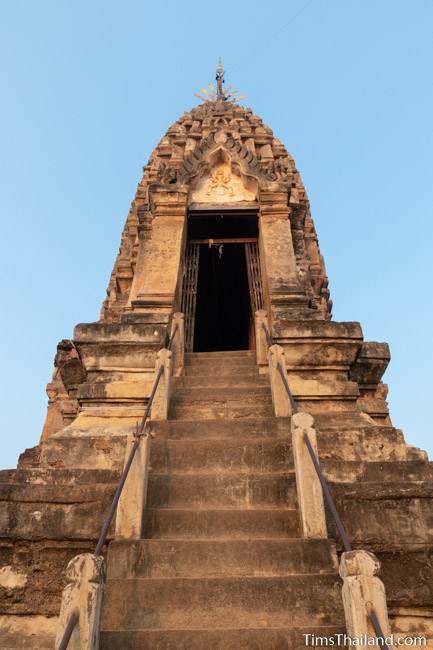 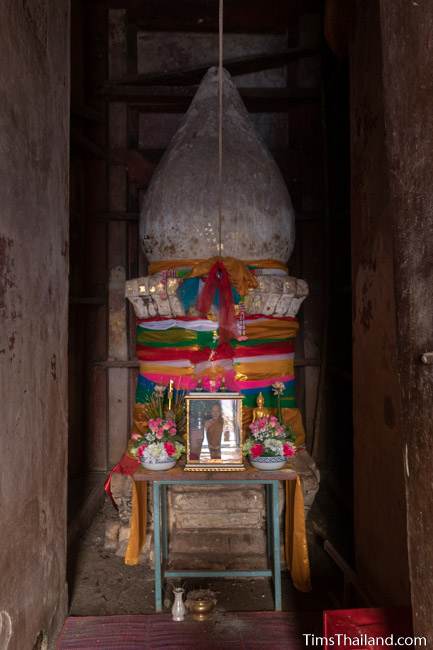 The prang is now surrounded by a pair of cloisters that were once full of Buddhas (only two remain) and is fronted by wihan with many pillars and much of the wall still standing. At the center of the wihan is a postcard-perfect sitting Buddha and to the south is a beautiful walking Buddha in classical Sukhothai style. 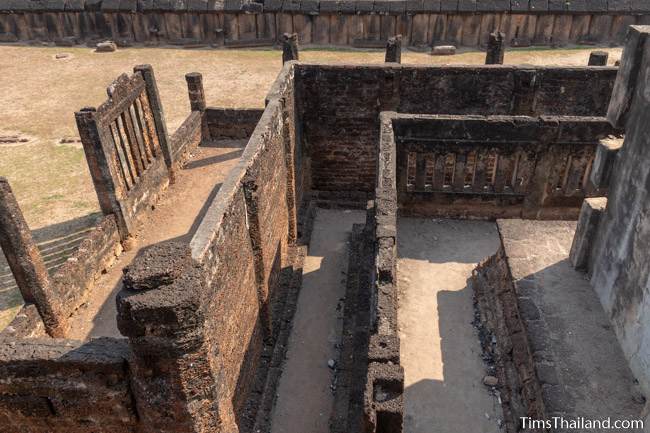 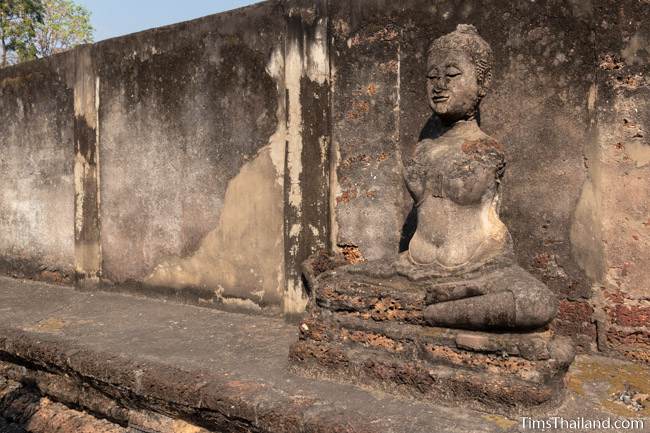 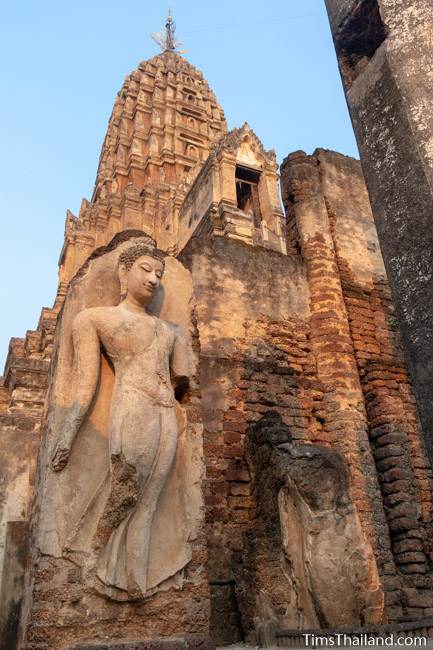 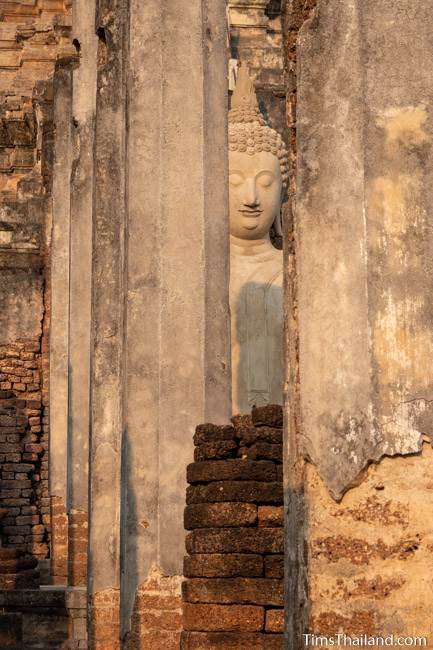 Alongside the prang and its appendages are some tall pillars (which may have been used for illuminating the temple at night) and a small shrine with a naga-protected Buddha image. 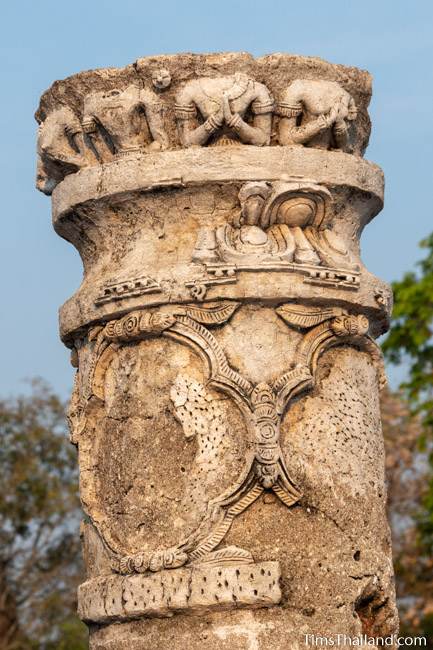 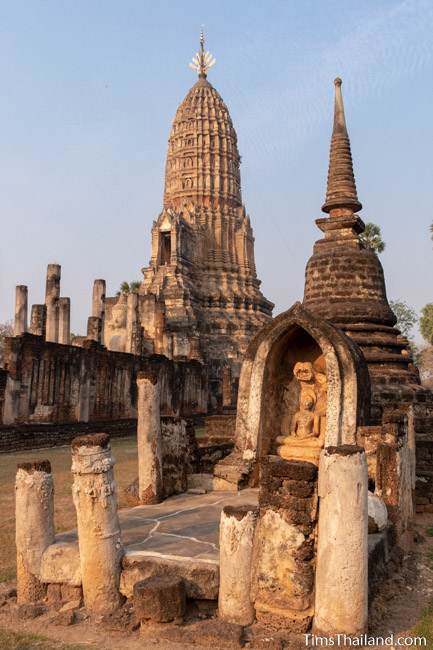 All of the above is surrounded by an unusual laterite wall made of thick round pillars. While the prang is Wat Phra Si Rattana Mahathat Chaliang's most impressive feature, the most noteworthy is the wall's front (east) gate because it's topped by a peculiar mini-prang with four faces on it. Unlike anything else ever found in Thailand, the consensus among historians is that it was made by the Sukhothai, so it's described as "Khmer-inspired." But the resemblance to the face towers at the Bayon (Jayavarman VII's state temple) can't be missed – they even have the iconic small smile – and so it can't be ruled out that this is actually Khmer. And like the Bayon faces, just who they represent is unknown. The leading assumption is Avalokitesvara, a Bodhisattva of compassion in Mahayana Buddhism (even though Sukhothai followed Theravada Buddhism), while Brahma is another possibility. And if it was commissioned by Jayavarman VII, then it could even be his face, which is one of the theories about the faces at the Bayon. 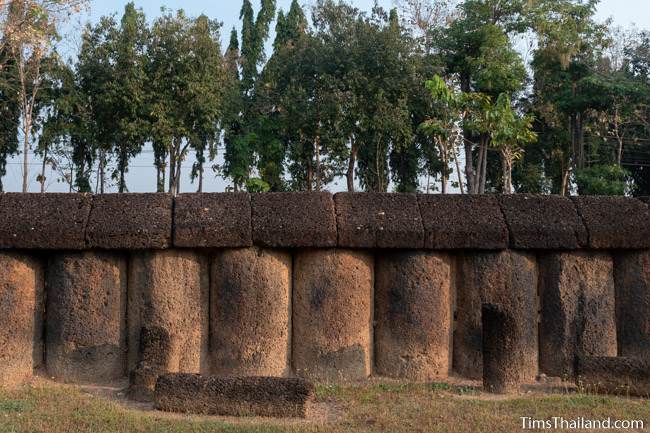 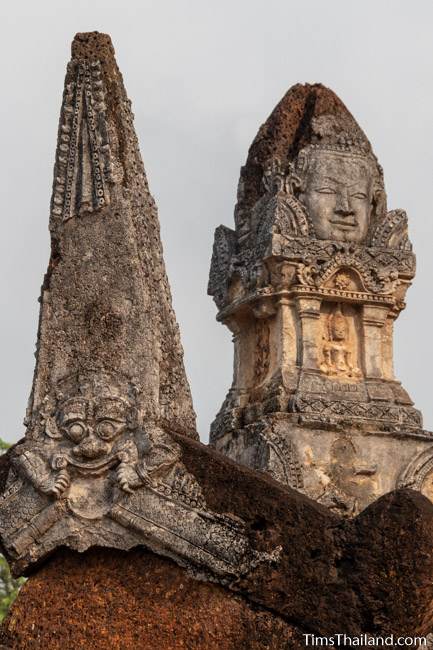 A second mini-prang over the back (west) gate is more decayed, but enough stucco remains to show that it did not have faces on top. Both of them have small Buddha niches below petite pediments in the center and dancing apsara around the base.

Wat Phra Si Rattana Mahathat Chaliang's back half is enclosed by a different laterite wall; this one smaller and built of square blocks. For unknown reasons, its northern portion veers off at a rather sharp angle. Inside there's a huge octagonal base for a half-toppled stupa, a mondap with a well-preserved standing Buddha (named Phra Attharot), and two large sitting Buddhas on the base of what was once a second wihan. 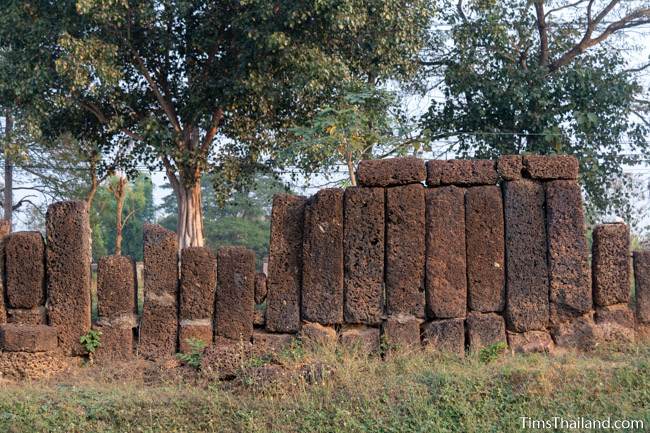 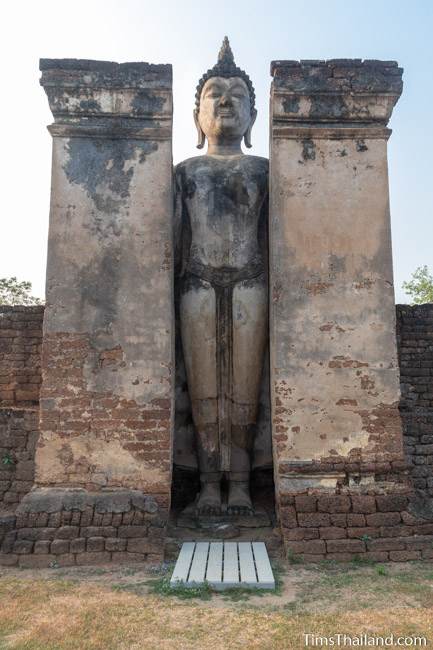 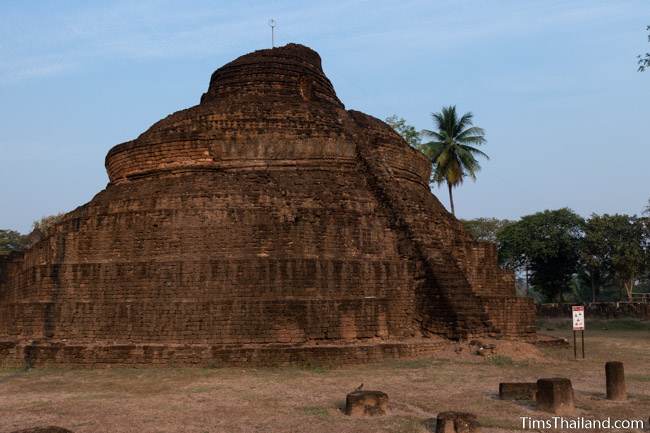 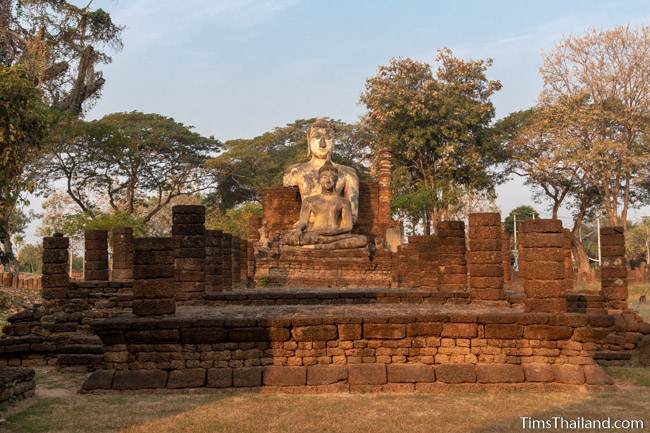 Outside the walls to east is a modern ubosot built on an old base, which can still be seen clearly sticking out beyond the walls. To the south, surrounding a Bodhi tree, are piles of laterite blocks not used during the restoration. 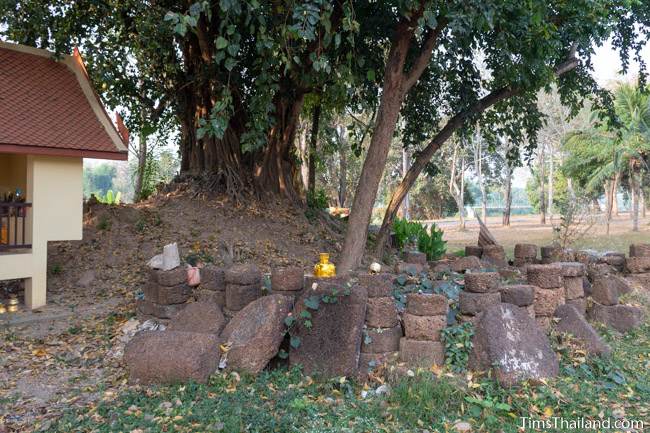