Wat Si Sawai (วัดศรีสวาย), located within the old city walls about 200m southwest of Wat Mahathat, is one of the most visited ruins at Sukhothai Historical Park. At its core is a main sanctuary with three prang towers built by the Khmer in the late 12th or early 13th century. Despite this being the reign of Jayavarman VII (r. 1182-1219), a devout Buddhist, it appears that it served as a Hindu temple since a Shiva linga, Shiva and Vishnu statues, a yoni (now put on display outside the eastern prang), and a lintel with the Hindu creation myth (Vishnu reclining in the sea of eternity, represented by a naga, and Brahma sitting on a lotus flower growing out of Vishnu's navel) were found here. This lintel and other items are on display at the Ramkhamhaeng National Museum in Sukhothai. 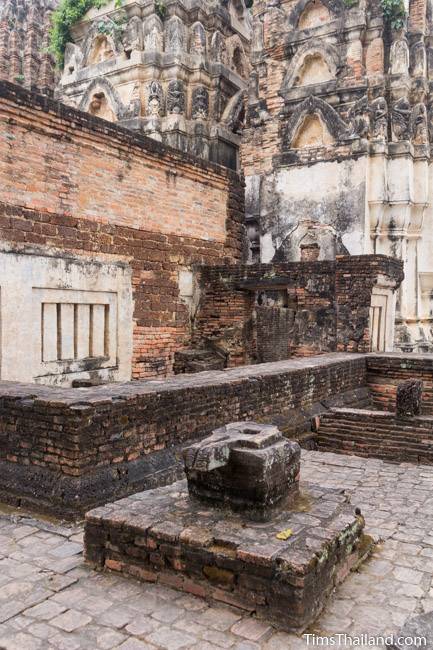 Nobody knows what the temple was called in the Khmer era, but Prince Damrong theorized that the current name, Wat Si Sawai, is a corruption of Sri Siwaya (ศรีศิวายะ), meaning "glorious Shiva" in Pali. King Rama 6, who visited in 1907, found two old wooden logs and had the idea that perhaps this temple was used for performing the Triyampavai-Tripavai ceremony; the same Brahmanic New Year ritual for the giant swing in Bangkok. 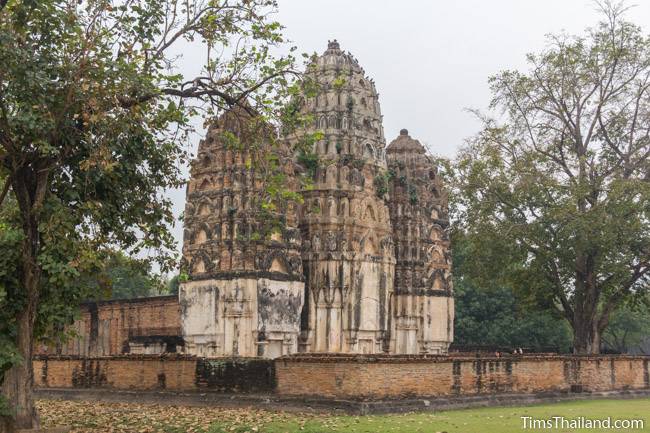 The three towers face south (most Khmer temples face east, including the other two at Sukhothai: Wat Phra Phai Luang and San Ta Pha Daeng) and are in remarkably good condition. The central tower is 15 meters tall and the flanking ones are just as wide but a few meters shorter. The lower halves are built of laterite and the upper halves of brick, meaning that the Khmer probably left the temple incomplete and the towers were finished (or significantly renovated) by Sukhothai. 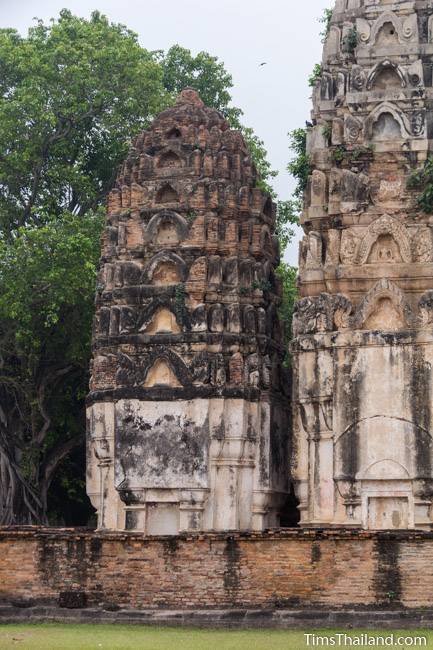 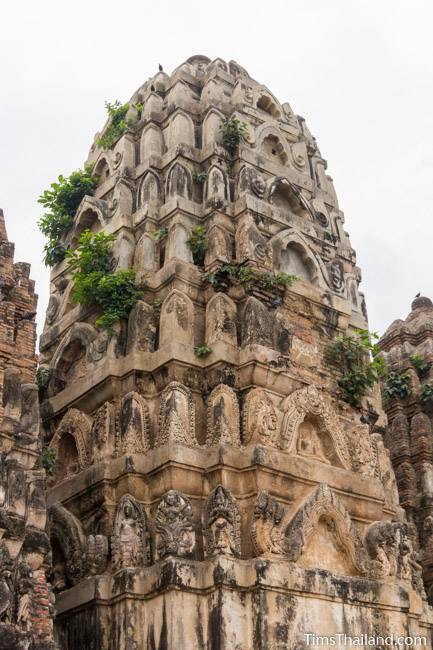 The white stucco covering the towers is also post-Khmer, though its naga, garuda, and other guardian antefixes have a clear Bayon-style influence. The arched pediments, many featuring Kala faces at the top, are particularly ornate and beautiful; though many of the Buddhas that had been in them have been chiseled off. The featureless stucco on the top half of central prang was added by Fine Arts Department during restoration and the difference between this and the old stucco is very clear to see. Although the stucco detail should be examined up close, people should also go take a wide view of all three towers in the back from across the remaining stretch of the moat, which is named Sa Loi Bab (สระลอยบาป), the "Pond for Floating Sin" by local people. 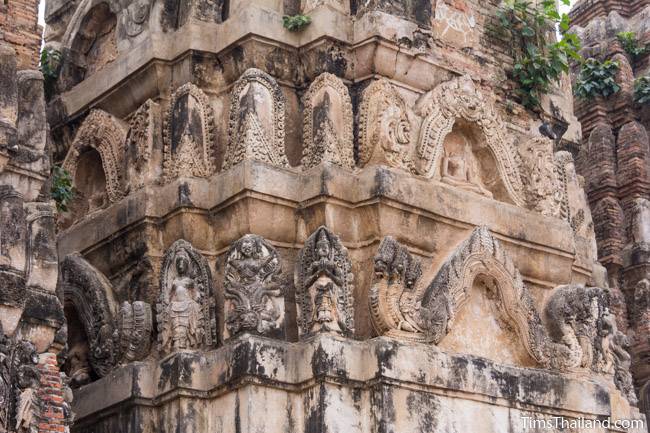 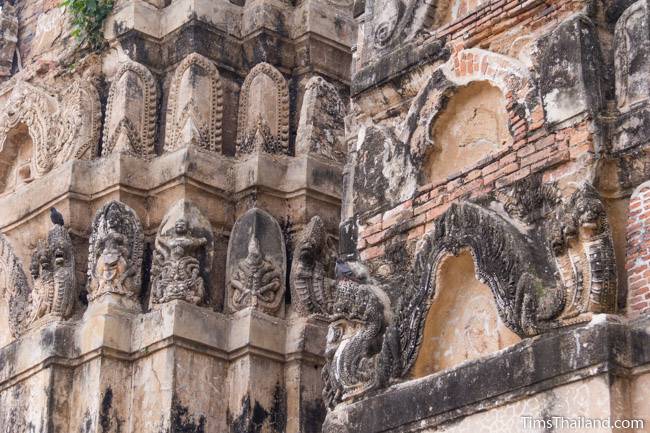 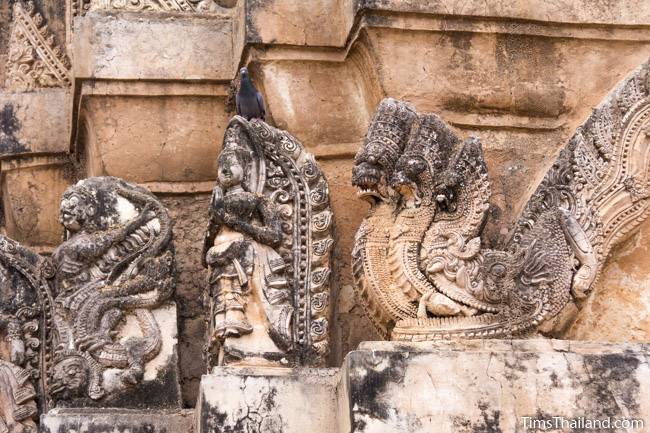 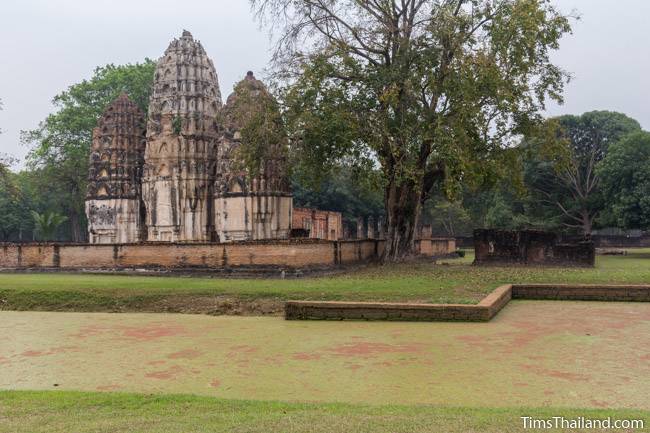 The towers sit on a low base and you step down a bit to enter them, though it wouldn't have been this way before Sukhothai modifications. There are no shrines, carvings, or anything else inside the towers any more, though people do somethings burn incense and candles. In the central tower you can see remnants of wood from a Sukhothai-era ceiling. 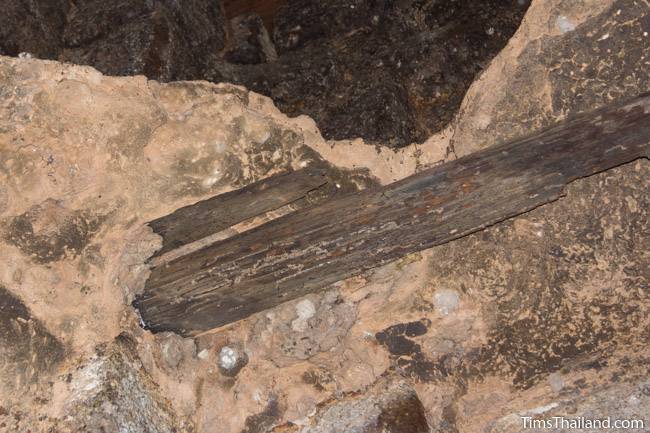 All other structures were built by the Sukhothai around the 14th century when Wat Si Sawai was converted to a Buddhist temple. Most notably are the two wihan (assembly halls), both about 20 meters long, directly in front of the towers. The one adjoining the towers (known as the central wihan) has solid brick walls with narrow slats for light instead of full-sized windows. About all that remains of the southern wihan are the large laterite pillars, and these, combined with the towers in back is the standard, must-shoot Wat Si Sawai photo-op. 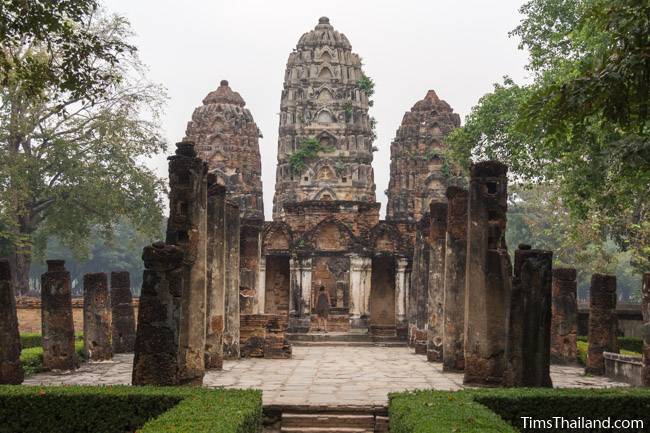 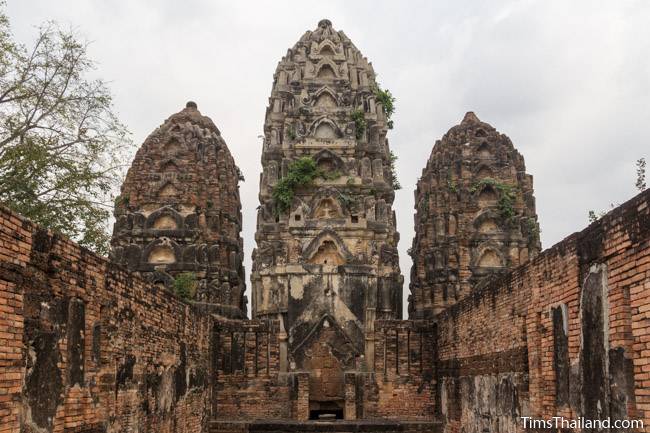 There's a 30 x 36-meter inner enclosure built of brick surrounding the towers and the central wihan and a 100 x 110-meter outer laterite wall surrounding the entire complex. Between the enclosures, west of the towers is a small laterite building of unknown purpose. At the southeast corner of the inner enclosure is a giant bodhi tree with an amazing mass of roots rising above the ground. 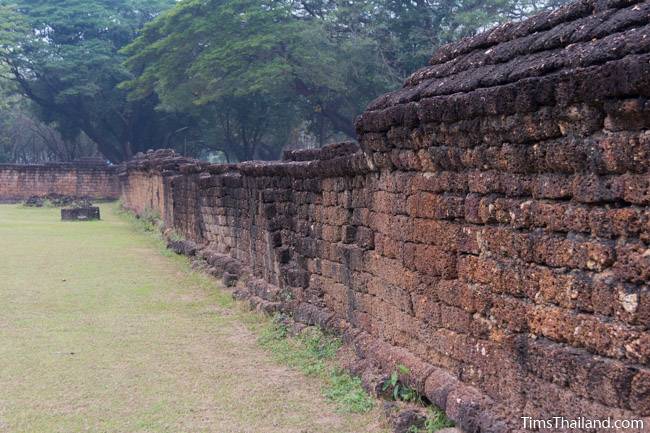 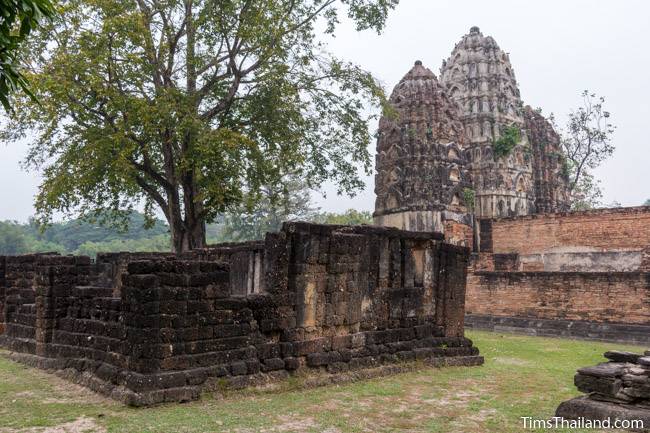 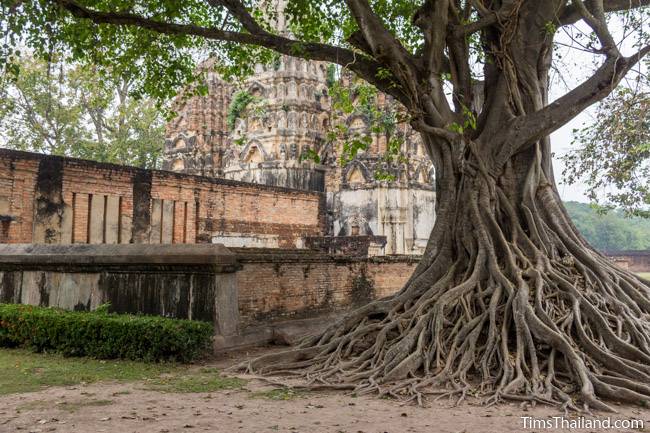 Location – Sukhothai Historical Park, Tambon Mueang Kao, Amphoe Mueang, Sukhothai Province
Other names – Sometimes spelled Wat Sri Savaya. The map given out to visitors to the historical park misspells it in English at Wat Si Sawat, and thus so do many websites.