Prasat Ban Phluang (ปราสาทบ้านพลวง) is not one of Thailand's well-known Khmer ruins, but it's a great place to visit for people interested in ancient art. It was built in the second half of the 11th century in Baphuon-style during the reign of Udayadityavarman 2. It's very small and simple, but the setting, with many trees around it, makes it beautiful and the carvings are excellent. 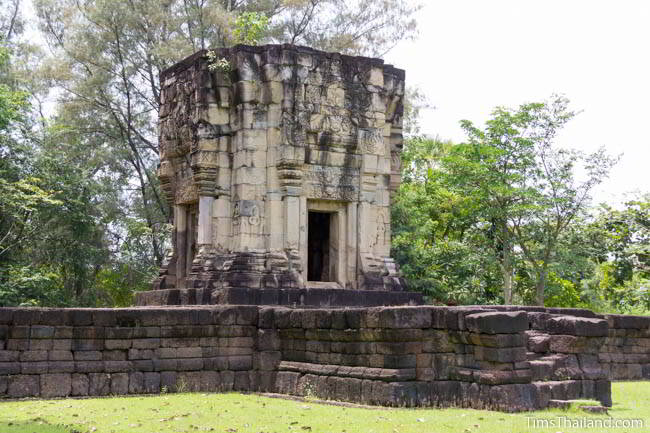 There's a single white sandstone tower on a laterite base facing east. The tower does not have a top and nobody knows why it's missing. But, since no stones other than what are there now were found during the anastylosis restoration (expertly done in 1973-75 by American archaeologist Vance Childress) the assumption is that the temple was never completed. In the Khmer empire, this was a common occurrence after a political or dynastic change happened during construction since new king's wanted to build their own temples. However, the reason could have been a lack of funds or an episode of drought, disease, war, or migration. It is also possible, though unlikely, that wood was used in the temple and this would have rotted away completely by now, leaving no evidence.

The platform is large enough that they were probably going to (or perhaps actually did) build more towers to the sides. And since having a front projection for a platform as large as this one is uncommon, there could have been, or was intended to be, an entrance roof or hall on the front projection, but that's just archaeological conjecture and there is no evidence of either having ever been built. 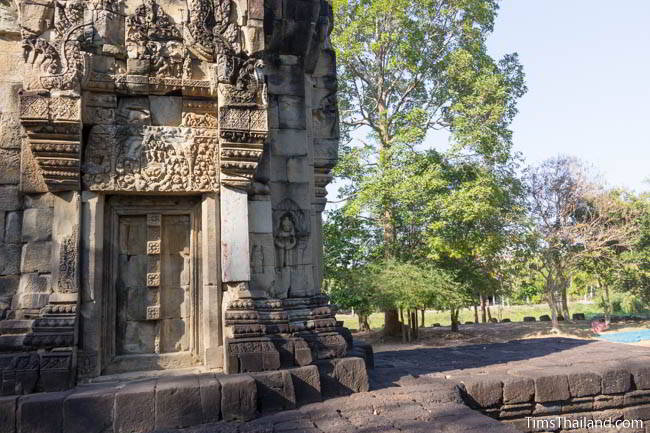 Many of the carvings are in very good condition and were expertly done; in particular they're very deep. It's rare to have multiple scenes of Indra at a Khmer temple (here there are three, and perhaps four because the southern pediment might also be him) and nobody knows why they did it here. There is also a carving of Krishna lifting a mountain, which is done in response to a storm sent by Indra. Many of the carvings, including most of the pilasters and colonnades, are unfinished, which is further evidence toward the assumption that the top of the main tower and the two side towers were never built. 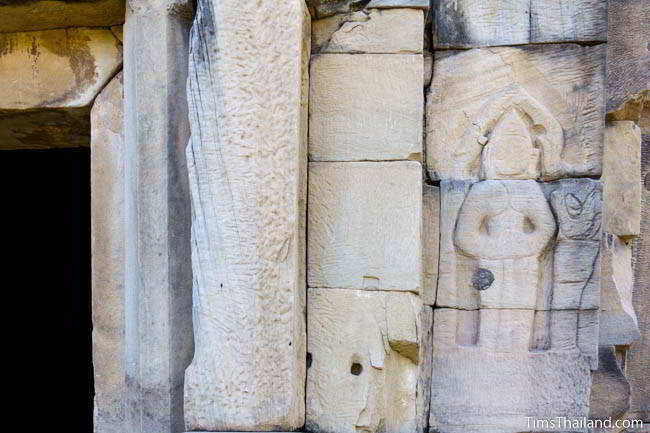 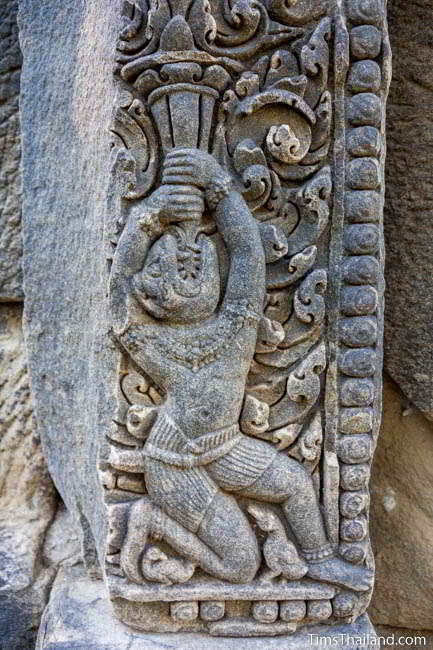 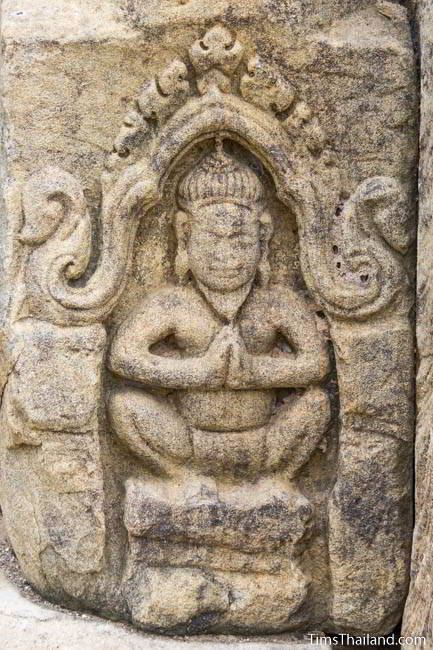 Although unfinished, the temple was used for worship. Since there are no carvings of Shiva, it's assumed Prasat Ban Phluang was dedicated to Vishnu. Over 4,000 pottery fragments, which would have equaled at least 270 completed vases but probably about 400 (the most pottery found at any Khmer temple in Thailand) were unearthed directly in front of the entrance, so they were likely used in some ceremony, perhaps for making offerings. There was a variety of colors and styles and some Khmer-made urns were glazed in two colors, which was a very rare style for the Khmer and only done during the late 11th century, the time when this temple was built. Most of the pottery matches others found at the kilns near Ban Kruat, which are about 35km away as the bird flies, so it was probably made there. All the pottery was Khmer except for nine Chinese white ware vases. One of the old Khmer pots that is only partially broken is inside the tower now and used by locals for making offerings.

The temple is surrounded on all four sides by a moat that is narrow on the sides and back but wide in the front, where an earthen causeway allows access. One hundred meters in front of the temple is a large baray (reservoir) that is about 350m x 350m now, but in the Khmer time it was about 350m x 970m. The town here at the time of the temple was almost as large as the original baray and is assumed to have been a somewhat important town, not just a little village like there is here now.

The lintel over the doorway shows Indra on his elephant Airavata (The Thai name is Erawan) in a rare one-headed form instead of the usual three. Indra is the god of sky and rain, but also the god of the east. At the top of the lintel are six meditating aesthetics making different gestures. The pediment shows Krishna lifting a stylized Mount Govardhana to protect cattle and their keepers from a storm sent by Indra. Next to the doors are two bas-relief carvings. The one on the left is a dvarapala guardian and the one of the right has only had its basic shape roughed out, but it was probably going to be an apsara celestial dancer – these are common at Angkor Wat, but very rare at Khmer ruins in Thailand.

Although Indra is the main subject of the exterior carvings, the temple was built for Shiva and there's a broken yoni, a vagina-womb symbol, that once held a Shiva linga, a phallic representation of Shiva. It still serves as a shrine for local people and a broken pot from the Khmer era is the incense holder. During the restoration, pieces of wood were inserted where the original wooden ceiling was. The open top is covered by fiberglass.

The south lintel shows Indra riding an Erawan with the usual three heads. The pediment is damaged and incomplete and the subject is unknown; but the deity is in the exact same pose as Indra in the lintel below, so it could be him. The pediment's kala head is grasping a singha mythical lion. The bottom of the pediment shows several animals, including what some archaeologists believe is an Arabian horse standing over a young camel (though it's a big stretch to assume they are anything other than just ordinary horses), which they believe is evidence indicating trade between India and Isan.

The west lintel and pediment are both uncarved, except that the very beginnings of the makara-naga frame around the outer edge has been started. A part of one fully carved pilaster is there next to the door, but the rest is missing.

The north lintel shows the god Krishna fighting the naga Kaliya and the pediment has another Indra on a one-headed Erawan, this one very faded, which is strange because the carving around it is still in good condition.