This is a typical version of the Nang Phom Hom legend. I’ve also written a long version of the story as told in the paintings at Wat Nong Wang temple in Khon Kaen city. These photos on this page were taken there too.

Nang Sida was a beautiful and beloved princess from Nakhon Sri Ratchathani, the greatest city in the land. One day she went to find food in the forest and got lost. She got very thirsty and drank some water from a wild buffalo’s footprint, but it wasn’t enough to quench her thirst. Later she found an elephant footprint full of water and she was able to drink her fill. Eventually a hunter found her and led her safely back home. 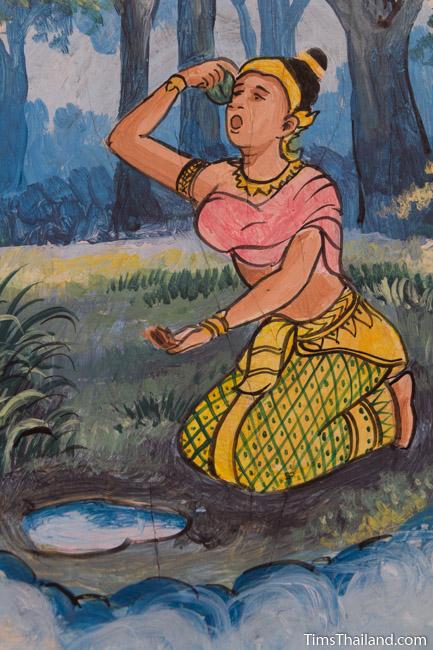 Soon after her trip in the forest, Nang Sida was shocked to find that she was pregnant, despite not having been with a man. She had twin daughters, one named Nang Phom Hom, because of her beautiful smelling hair, and the other named Nang Lun. Nang Phom Hom was kind and generous, while Nang Lun was mean and envious. Growing up was difficult for them because other children teased them about being daughters of an elephant, but they did not know why people said this about them. 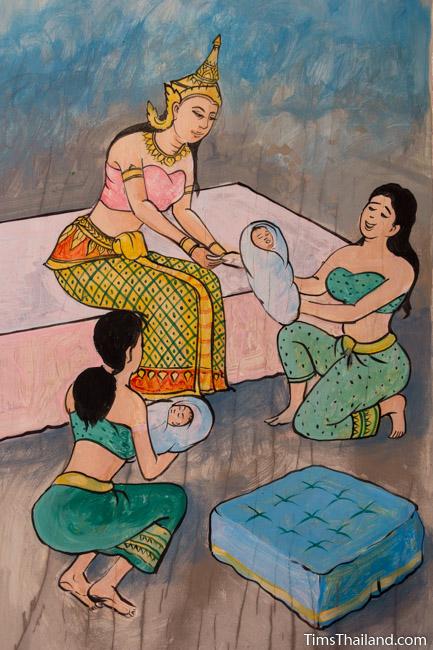 Finally, when their mother was on her deathbed, she told her daughters the truth about how she had gotten pregnant after drinking water out of footprints. Following the funeral, the two girls set off to the wilderness to find their father, who they assumed must be the king of elephants. 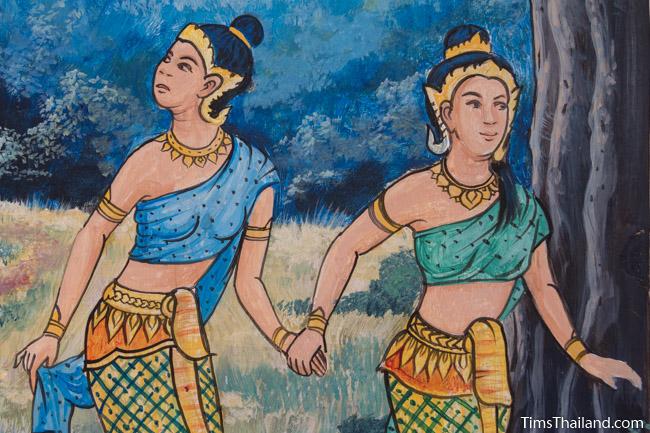 When they reached the land of the elephants, Nang Phom Hom and Nang Lun told the first elephants they met that they were the elephant king’s daughters and asked to be taken to see him. They found the story ridiculous, but agreed to take the girls to see their king, even though humans were normally forbidden from the elephant realm. 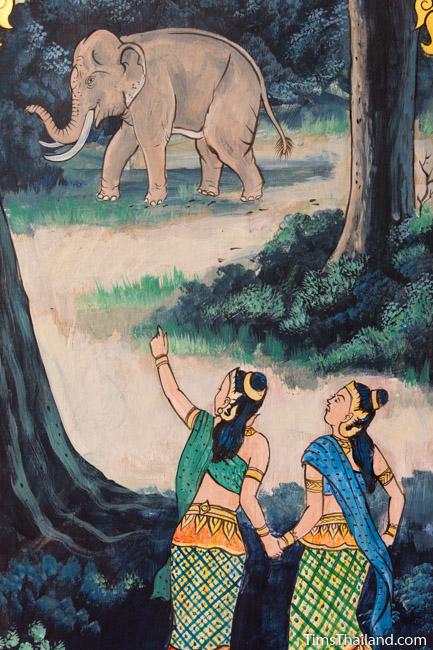 The elephant king also rejected their story, but he gave them the opportunity to prove whether he was their father or not by walking up his tusks and sitting on his neck. If they could do it, they were his daughters; if they couldn’t, he would stomp them to death. 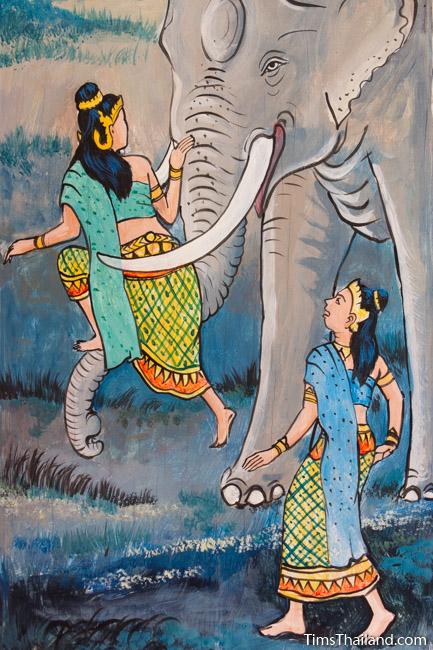 Fleet of foot, Nang Phom Hom, made it up without a stumble, but Nang Lun fell down and the elephant king flattened her with his foot, ignoring Nang Phom Hom’s pleas to spare her sister’s life. 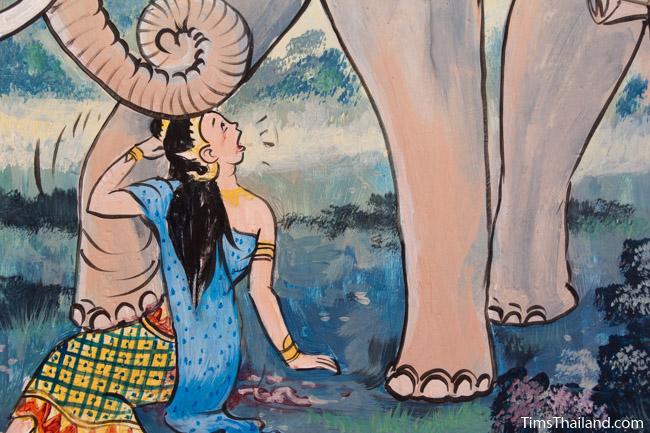 The elephant king brought Nang Phom Hom back to his home and gave her a palace in a cave. He took good care of her and she grew into a beautiful woman. One day he told her that he needed to make a long journey to a distant land and he would be gone for many years. It was too dangerous for her to go, so she needed to stay behind. 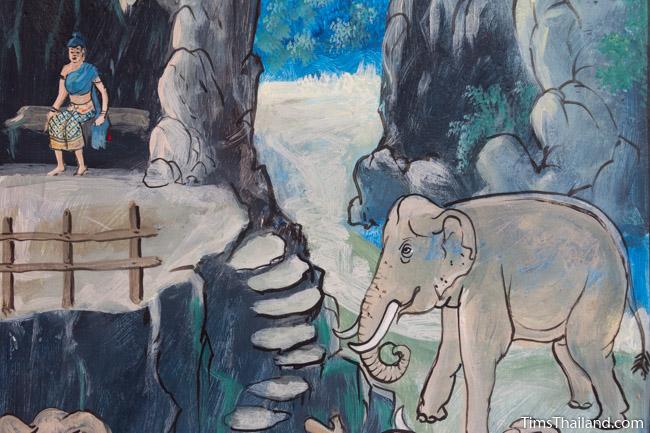 With her father gone, she grew lonely and dreamed of having a husband. She could not leave her home to find one, so she cut off a lock of her hair, put it in a box, and sent it down the river with a prayer to Indra that a worthy man would find it and come to her. 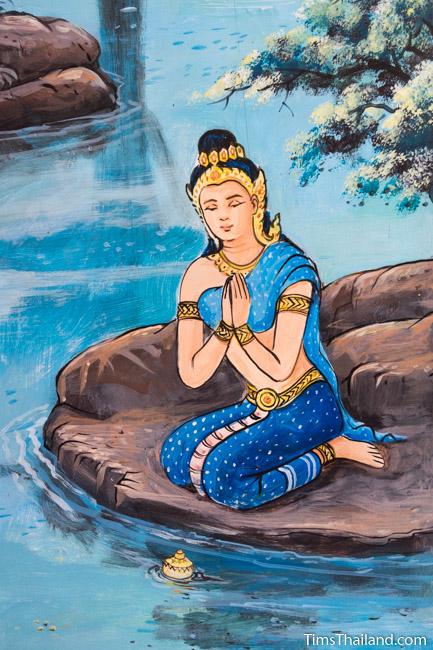 Many weeks later, a handsome young prince saw the box floating on the river and told his soldiers to bring it to him, but none of them could catch it. So the prince went down to the water and was able to grab the box easily. He opened it and was so enchanted by the fragrance of the hair that he set off to find the woman who sent it. 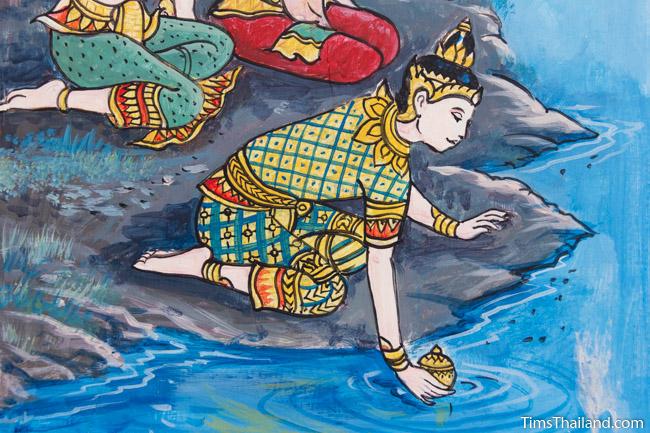 He searched a long time until finally came upon her bathing. They both fell in love at first sight and decided to get married. They lived in her palace and had two children and were a happy family. 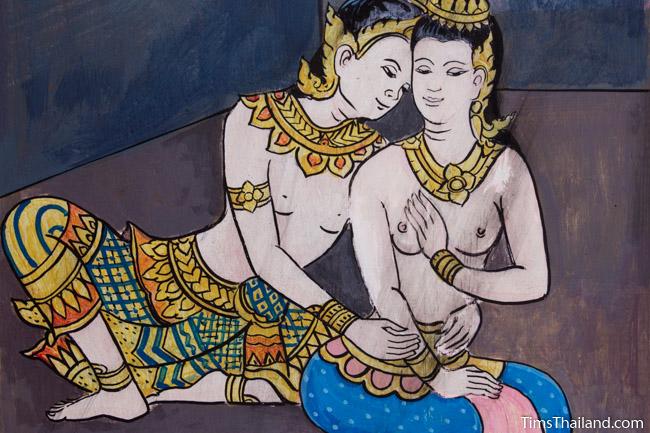 Eventually the elephant king returned and Nang Phom Hom welcomed him home, but kept her family hidden in her palace. They were in constant fear for their lives and so built a raft and floated down the river to go to the prince’s kingdom. 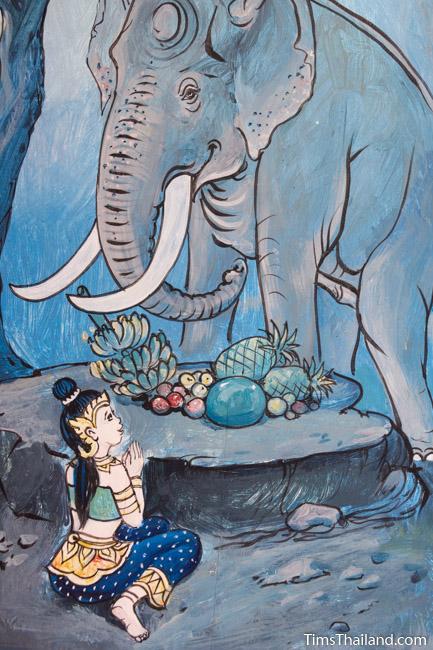 The elephant king saw them leaving and called out that he was dying and begged Nang Phom Hom to return so he could say good bye. She jumped off the raft and swam to shore, He said he loved her and was not angry with her for having a family, and he understood why she didn’t tell him about them. He then told her that when he was dead, she should take his tusks and throw them in the river. Moments later he closed his eyes and died. 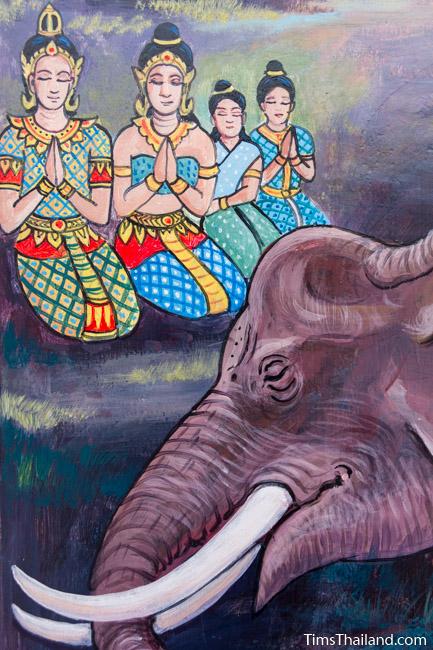 Nang Phom Hom did as her father requested, and upon hitting the water the tusks transformed into a golden boat. She and her family got in it and set sail down the river. It was a long journey through deep wilderness inhabited by many ghosts. 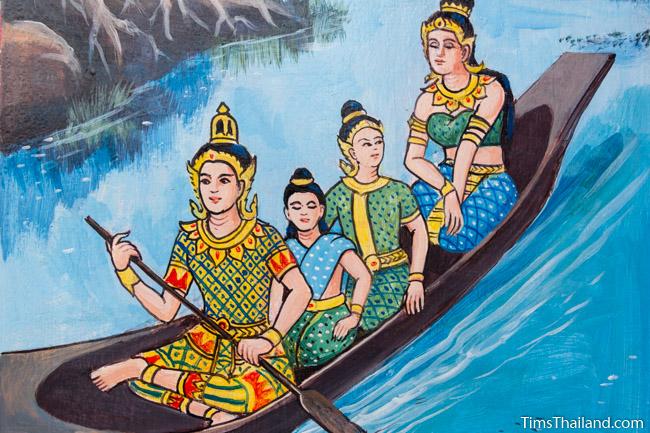 When they stopped one night an evil ghost saw the prince and wanted to have him for herself. In the morning this ghost took the form of a beautiful lotus and when Nang Phom Hom went to pick it she was transformed into a monkey while the ghost made herself look exactly like Nang Phom Hom. 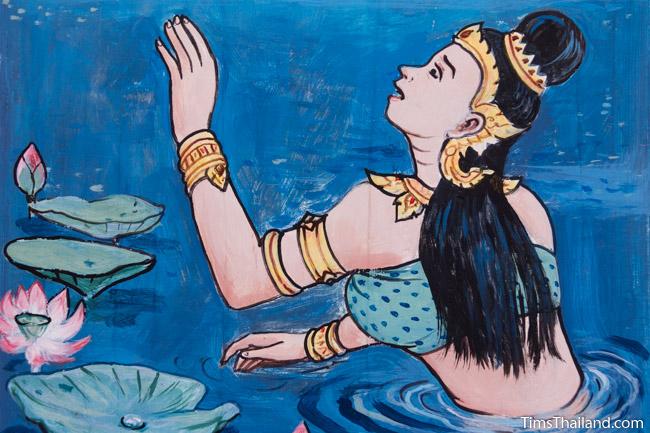 The children knew something was wrong with their mother, but the prince did not notice and so the ghost got in the boat and they continued down the river to the prince’s city where they were given an enthusiastic reception. Nang Phom Hom followed the boat and stayed in the forest outside the city, hoping that she would see her family again. 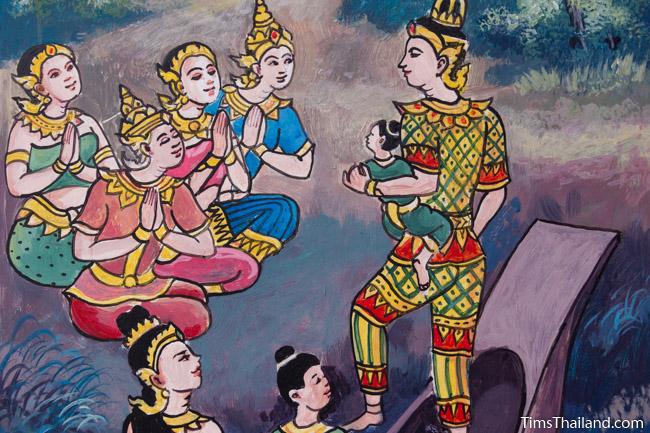 One night the children, now certain that the woman was an imposter, snuck out and went to the forest where they found their real mother. The overjoyed Nang Phom Hom told her children that they must not let the ghost know they had found the truth about her. The next day they brought their father out to the woods and when he smelled the monkey’s fur, he knew that it was really Nang Phom Hom. But nobody knew what to do next. 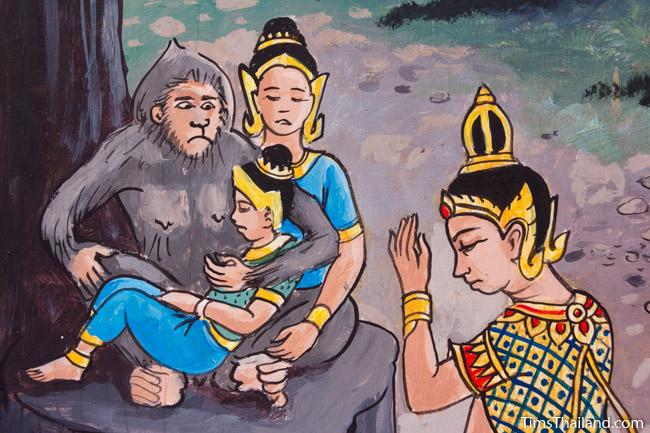 The prince consulted an ascetic holy man who told him the only way to break the spell was for Nang Phom Hom to bathe in the blood of the ghost who cast it. So, the prince sent his strongest soldier to tell the unsuspecting ghost that the prince wished to meet her out in the forest, and he would take her there. They rode his chariot and once they were away from the palace they stopped and he killed her. 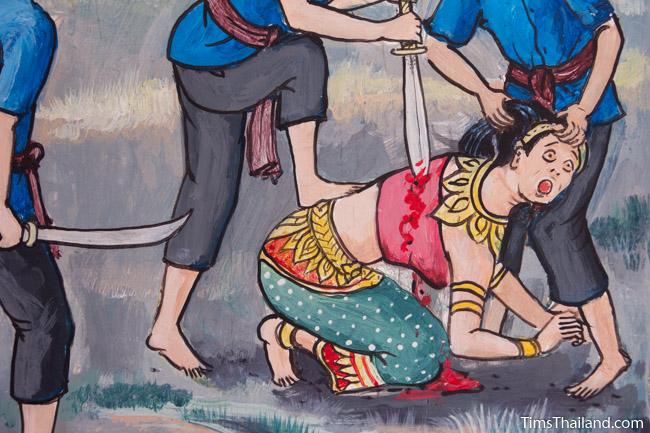 The soldier took the blood to the prince and Nang Phom Hom and she became human again. And, of course, they lived happily ever after. 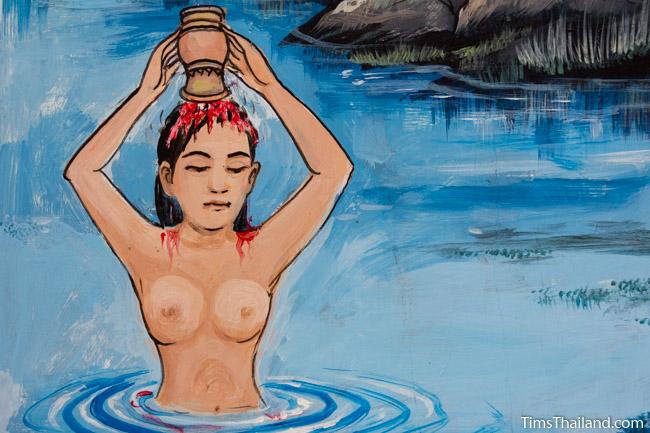